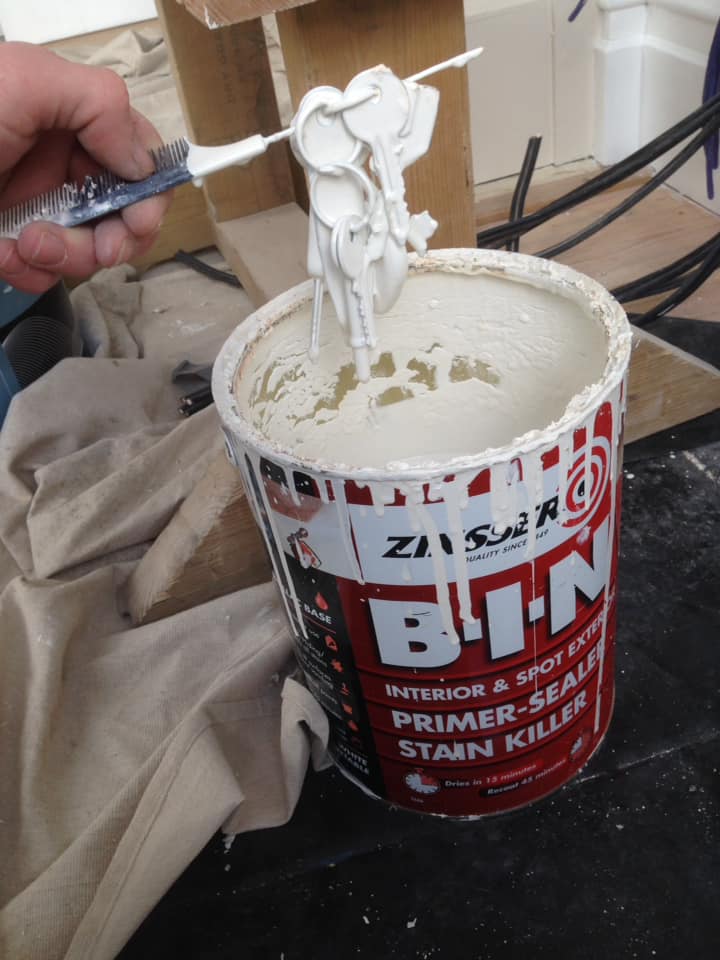 Shellac based primers (made by beetles and used to decorate the fingernails of women) are all designed for the same purpose. They adhere to problem surfaces and block out stains. There was a time when Zinsser BIN was the only product worth looking at. However, in the last few years Coo-Var and Smith & Roger have all brought out their own versions. But which is the best shellac based primer? I thought I’d put together a quick shellac based primer review for each of the three main brands to help you decide what to buy.

First of all, let’s look at what you might use a shellac based primer for. You can use them as an adhesion primer for painting over old varnish, stain, plastic, existing oil-based paint, metal and ceramic tiles. You can also use shellac to block out knot bleeds on previously painted timber. Priming bare timber is another use, although there are easier products on the market that are up to the task. The last problem shellac based primers solve is stubborn stains which would otherwise bleed through your paint finish. These include water marks, grease, permanent pen, graffiti, nicotine and basically anything else.

Shellac based primers are generally not used as a finish coat. You use them to solve a problem before painting over it. They wreck brushes so buy cheap then throw away. You can’t use them for large exterior areas because, even though shellac is tough as old boots, it dries brittle and can’t flex.

Anyway, let’s get into the reviews

Zinsser BIN needs to be the benchmark, simply because it is the brand leader and BIN was the first shellac based primer on the British market. Touch dry in 10 minutes and you can recoat in 15 – 20 minutes which makes it the ideal product for blocking out stains when using emulsion. It is probably slightly more condensed than the other two and a bit harder to use. A massive plus point is you can buy Zinsser BIN in aerosol form which is brilliant for stop priming stains. Another plus point is you can buy Zinsser brush restorer which is designed to help you rejuvenate your brushes after use in BIN. The price per litre is around the £25 mark. Zinsser Aerosol is around £20. The brush cleaner is cheap as chips. My Paintbrush sell most of the Zinsser products. You can use discount code DF8 at the checkout.

Coo-Var were the next paint manufacturer to have a crack at a shellac based primer. You will find it side by side with Zinsser BIN at Crown Decorating Centres nationwide. This product is a little bit looser and easier to use than Zinsser BIN, so probably the easier choice for bare timber. It is cheaper as well at around £20 per litre. This does not come with brush restorer so go cheap and throw away when it comes to tools. They do a sprayable version called Stain Lock which is amazing on things like MDF or varnished trim.

Smith and Roger are the latest player to have a crack at a shellac-based primer. Again, I’m going to use Zinsser BIN as the benchmark. Blockade is probably slightly easier to use again and doesn’t clog your brushes us quite as quickly. It doesn’t spray as well though. Blockade is available online at TopDec Brush.

It’s all the chuffing same stuff!! There are some minor differences, but they do the same job in the same amount of time. If you’re spraying its worth having the Coo-Var stain lock. It is worth having some Zinsser brush restorer knocking around because it works for all three shellac based primers anyway. The Zinsser BIN aerosol is amazing too. Other than that, just get whatever is cheapest. If you’re getting the Zinsser aerosol and brush restorer anyway, grab the Zinsser BIN. Honestly though, just follow one of the links above and get something ordered.