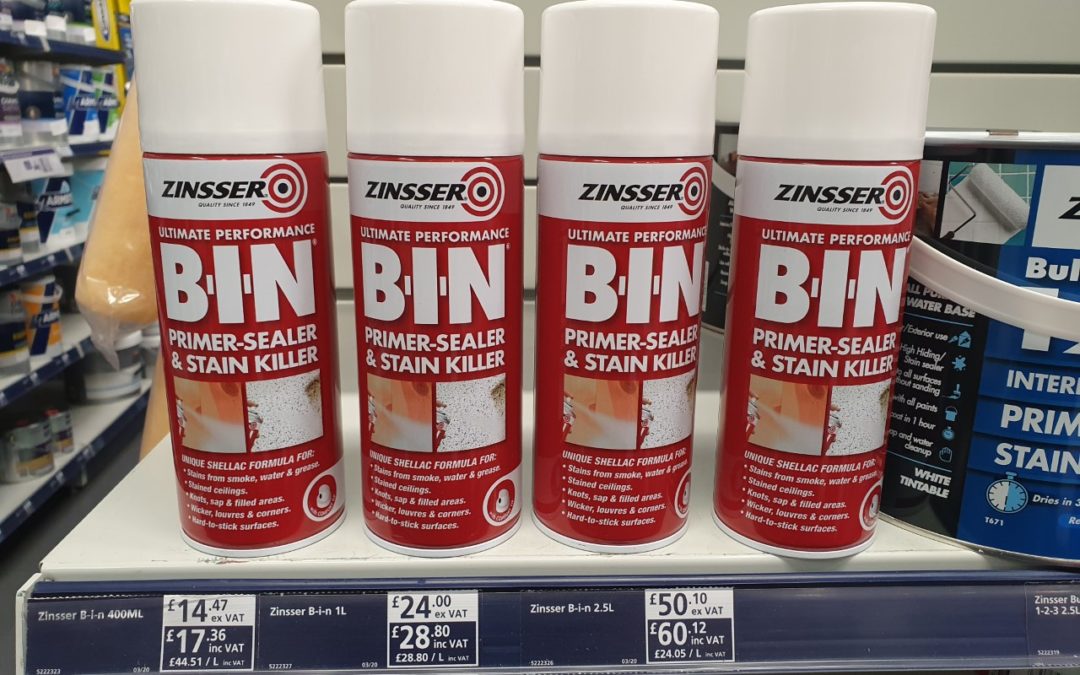 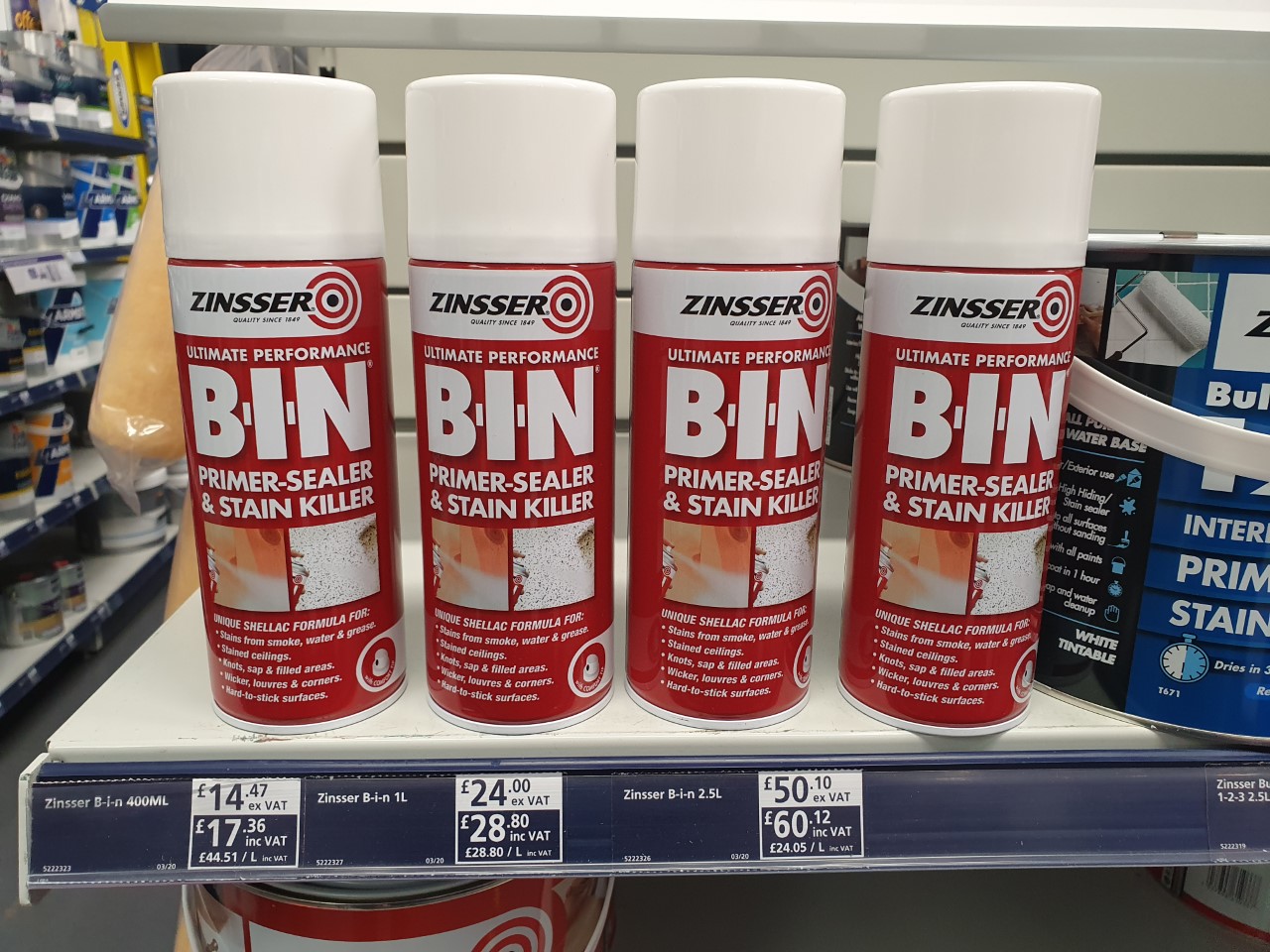 As a professional decorator I use a multitude of Zinsser products on a regular basis. None more often than Zinsser BIN. So I thought I’d put pen to paper and write a quick Zinsser BIN spray can review.

What is Zinsser BIN Made From??

Zinsser BIN is a shellac-based primer which will stick hard and fast to pretty much anything. The shellac itself is produced by the female lac bug, which is a beetle native to India, Thailand and a few other Asian countries. As well as being used in decorating, ladies (and some men) use shellac products on their fingernails!!

What is it Good for??

Tor Coatings (or Zinsser) specialise in “problem solving products” and BIN spray is no exception. It is an awesome stain block for starters!! It deals with all the regular stains such as water damage, marker pen, nicotine and the like. It dries within minutes too, meaning you can use it when emulsioning to hold back some nasties, but it won’t hold the job up.

It holds back stains from knots too. So if the knots in your timber weren’t treated correctly the first time it was painted and over the years you notice dark stains bleeding through your paint finish, just give the affected area a go with some Zinsser BIN, paint over as normal and hey presto!! You’ll never have the issue again.

As previously mentioned, Zinsser BIN will stick to pretty much anything. Melamine or varnished furniture, no issues at all!! You probably wouldn’t use the Zinsser BIN as a spray for larger areas, but it does come in handy for small bits and pieces. Varnished spindles are a doddle to prime with Zinsser BIN spray. Even skirting board or anything like that.

Zinsser BIN from a Tin

Zinsser BIN does come in liquid paint form which is probably better for larger areas. There is a disadvantage to using the paint in this form, but it is still awesome!! For a start off it’s very gloopy and can dry on your brush as you apply it. If fact, let’s just say it kills brushes for fun, even if you use Zinsser brush restorer. Zinsser BIN is available in 1L, 2.5L and 5L tins. If you want to read a full review click here.

There’s only one I can think of off the top of my head. Zinsser BIN goes brittle when it dries. This doesn’t cause an issue in most rooms in your house, but it can do if you use it in a bathroom, or outside. In environments such as these, a substrate and it’s coating may expand and contract due to the changing climate. In these situations, you can only use Zinsser Bin on small areas, or to “spot prime”, otherwise your paint will fail over time.

All in all, Zinsser BIN really is a great product to use and as a decorator I will continue to always have at least one can in my tool bag. I think pretty much every decorator uses it if I’m honest. It just performs so well and dries so quickly.

I thought it was worth mentioning a handful of the other products Zinsser manufacture. We’ve covered Zinsser BIN which is your heavy duty, hard to use (unless in a spray can) stain block / primer.

Next on the list is Coverstain. This is oil-based, easier to use than BIN, drying time is around 4 hours and is also used as a stain block / primer. This comes in a spray can, as well as liquid paint form and it is another product I use a lot of.

Bullseye 123 or 123plus is the water-based alternative. Still some stain blocking abilities, still an adhesion primer, although you probably wouldn’t use it for harder tasks like you would with BIN or Coverstain.