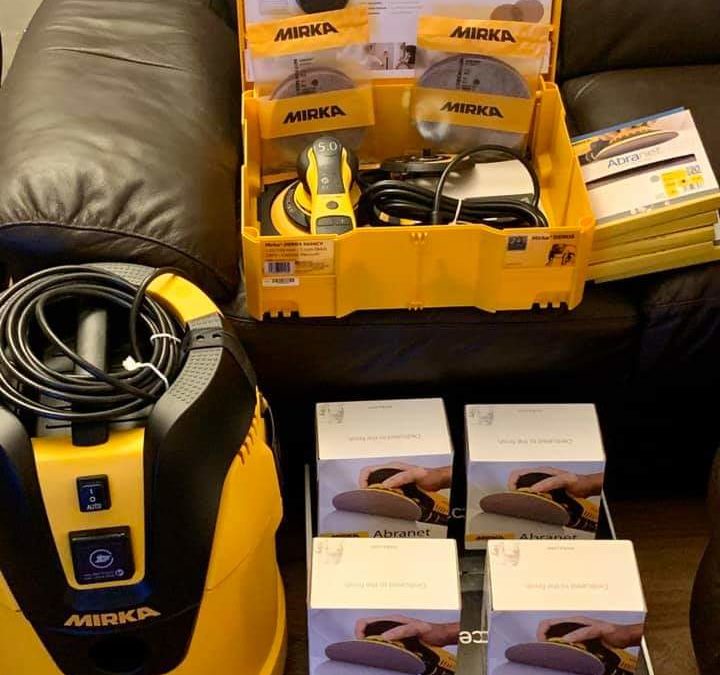 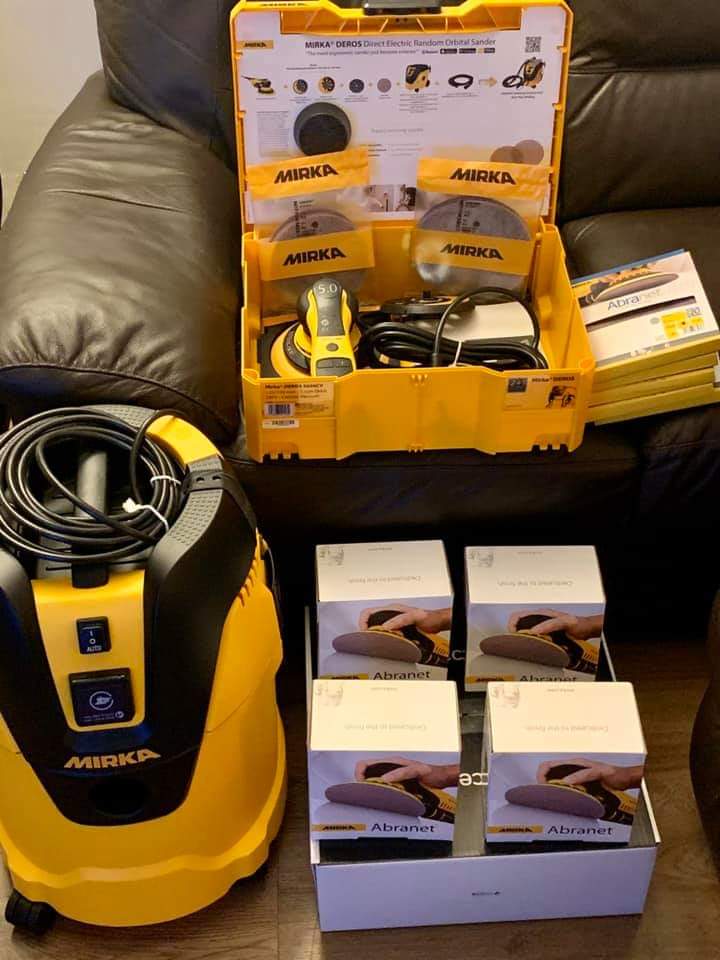 Hi, I’ve been asked to review the Mirka set up which I’ve been currently using for around 3 years now. This is my Mirka sander and extractor review.

The Mirka Deros is my favorite sander out of the kit I have. It makes life so much easier in job cleanliness and time saving aspects. It just keeps you on your toes with keying all surfaces up and it’s a pleasure to use. Pads are easy to change between the 150mm and 125mm you get with the kit, easy to operate with speed settings up and down. Hooked up to extractor you really do get at least a 95% dustless sanding finish with this set up.

The only problem I’ve had with the Mirka Deros was around 18 months in. The unit started to become louder and louder and then vibrate more. It didn’t feel right! With the unit being under warranty I emailed Mirka customer services, who put me in touch with a 3rd party company. To be fair the third party company planned to have my unit collected, repaired and returned within a week and all at no cost. They can’t be faulted for their customer service.

In the year plus I’ve had the unit back its been faultless and works perfectly. I would recommend buying Mirka abranet pads. There are many cheaper options out there and I’ve tried them all. They don’t last a 3rd as long as the abranet… Mirka might be dearer but you get what you pay for in that department.

Over the 3 years I’ve given the Mirka Deros it has had a hammering! To be honest some days it’s been on the go for hours and if you keep on top of the pads and pad savers it’s fine.

I’ve had Mirka Deos the same amount of time as the Deros and it’s a great sander on flats and doors etc. Nice and easy to use, quick and powerful. I do prefer it on some areas over the Deros to be honest. Especially into tight corners where the Deros can’t reach. Very well built unit solid. Overall good sander. I just love using the deros though over this wherever I get thechance so 8/10

I’ve had the Mirka Delta Deos since December 2019. Basically, it’s the Deos but with a mouse like sander head for tight hard to reach corners. It does exactly what Deos does in the same fashion, but I’ll say one thing this has over the standard Deos. This has is some crazy power! I don’t know whether it’s this individual unit, but I have to have this on low as possible in setting as it just seems to vibrate more than my standard Deos on flats (could just be the individual units).

To be fair this extraction unit is fine in size and weight for me. Suction is great when the bag is relatively empty. It’s nice and lightweight but the build quality is robust and easy to clean/service and change the bags when needed. The Mirka bags are a decent size so you do go a while between changes, depending on how much you use it obviously. I do use mine at least 3 times a week. I’d highly recommend this extraction kit.

Overall, I’m more than happy with all Mirka sanders and set up. I would recommend these to anyone thinking of investing in a dustless sanding kit. Start with the Deros and the extraction unit if budget permits. Then move on to the Deos or Delta Deos as add ons should you wish.

Many thanks for taking the time to read my Mirka Sander and Extractor Review. For more information on their products click here.