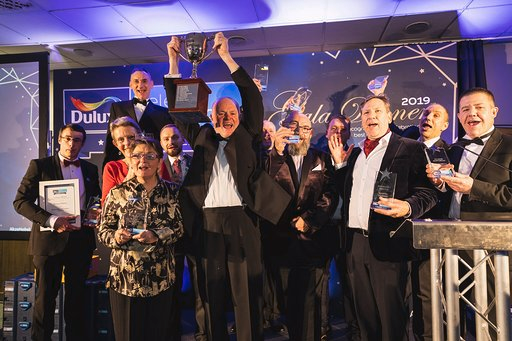 The Grand Winner of the 2019 Dulux Select Decorators Awards has been announced as Des Cass.

Des was revealed as the Grand Winner of the awards in recognition of his professional expertise and commitment to continuously exceeding customer expectations with the quality of his work, as well as his dedication to the trade and Select Decorator scheme.

Twelve category winners were also recognised at a new-look gala dinner following the first day of the two-day Painting and Decorating Show.

The category winners were announced as:

Overall champion Des, said: “After more than 40 years in the trade, it’s wonderful to be named as this year’s grand winner. It was a complete surprise as all the Dulux Select Decorators are incredibly talented, to have my work recognised after decades of dedication and commitment to doing this job to the best of my abilities is the cherry on the cake after a great year for my business.

It’s fantastic to be part of this scheme and having a network of such great peers has been a game changer for me.”

“We know that being a decorator can quite often be a lonely trade – and there is so much going on behind the scenes running a business that never even gets recognised. The Dulux Select Decorators scheme is all about bringing expert professionals together so that they can lean on each other and learn from one another.

“We decided this year to celebrate the Dulux Select Decorators with a new-look gala awards evening so we could really show our appreciation for all of our decorators, who continually prove that there is an exceptional amount of expertise in the decorating trade.

“It was fantastic to just take a moment to reflect on the hard work and dedication these people give the painting and decorating trade – as well as recognising those that go above and beyond in providing exceptional craftsmanship.

‘’It was also great to share the evening with our trusted suppliers, who’s generosity allowed us to raise over £1,000 for charity.”

Dulux Select Decorators undergo rigorous assessments to become members – they must have at least three years experience in the trade and have run their own business for a minimum of 12 months.

By becoming members they are entitled to use of Dulux branded assets, have access to subsidised rates on Dulux Academy courses and become part of a supportive community, with invites to social events and an exclusive forum with other Dulux Select Decorators. Members also receive monthly news updates, regular competitions and product discount vouchers.

For more information on Dulux Select Decorators, or to join the scheme, visit: www.duluxselectdecorators.co.uk

Crown Paints Boosts Darwin Community with £5,000 Donation   From getting scouts around town, to celebrating Darwen’s history, the annual Darwen Community Awards have once again given local worthy causes a boost thanks to grants totalling over £5,000. The awards are...
Read More

Watch: Albany, the Meaning of Colour

Why the Feel of your Brush is Important

Why the Feel of your Brush is Important    In research conducted recently by leading professional decorating tools manufacturer, Hamilton, ‘the feel’ of the brush ranked number 4 in the top ten most important factors when choosing a brush. But what is ‘the feel’...
Read More

As the Covid-19 pandemic hit, most of us found it difficult to keep ourselves afloat, but one Dulux Select Decorator wins an award for helping a community.

WIN £1000 worth of paint thanks to Brewers

Brewers Decorating Centres are giving you the chance of winning a shed load of paint on their social media channels! Head over to find out more!

Professional decorator Phill Southam talks about Google Mybusiness, which is a free business listing ideal for any tradesman.

John Palmer, Managing director of Coversure Poole gives you his Five Top Tips on Getting Decorator’s Insurance which will also help you save money!

Dulux Academy unveils a new state-of-the-art spray theatre at it’s headquarters in Slough in partnership with Graco for their stray courses.

Is becoming a Dulux Select Decorator Worthwhile? We interviewed three well known select members in a bid to find out more.